Reviewing Michelle’s website was like reading the “Who’s Who” of the coaching world. Frequently quoted in Forbes Magazine, The New York Times, and The Huffington Post, as well as appearing regularly on CNN, Fox, and MSNBC, Michelle was riding the crest of an amazing career.

I picked up the phone and squeaked, “Hello. This is Kim Avery. Is this Michelle?”

But I was not. 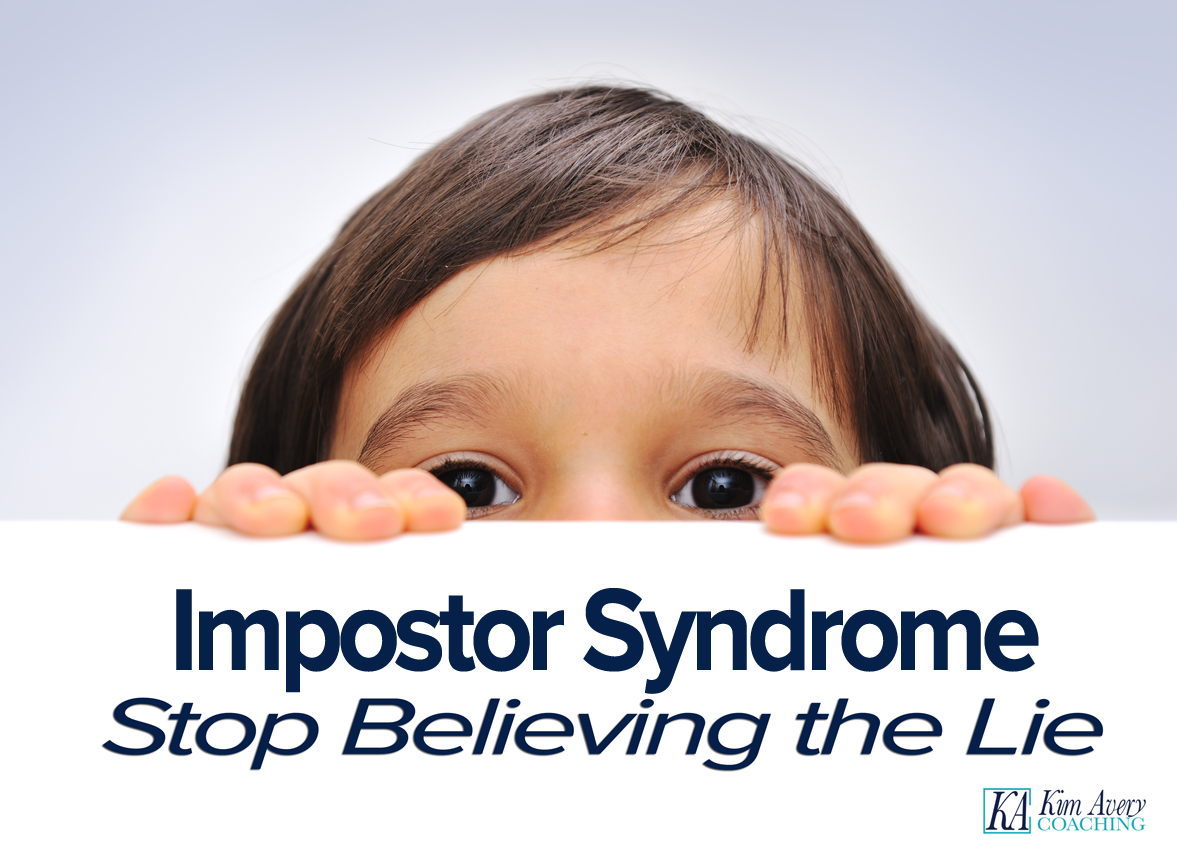 A maelstrom of self-doubt swirled in my head. Who was I to work with Michelle? What could I possibly offer her? Why in the world was she calling me? What if she discovered who I really was?

Impostor syndrome. That pesky, ever-present monster lurking in my the miry depths of my mind, had reared its ugly head. Again.

What is impostor syndrome?

Identified by two American psychologists, Pauline Clance and Suzanne Imes, they describe it as a feeling of “phoniness in people who believe that they are not intelligent, capable or creative despite evidence of high achievement.” Seemingly successful on the outside, these motivated, talented people live in fear of being exposed as frauds.

Over 70% of people will experience at least one episode of impostor syndrome in their lives [Gravois, 2007]. Frankly, I think that number is closer to 95%.

This is serious stuff.

While some nervousness is natural in any new situation, the consequences of believing the impostor syndrome’s lies are huge, especially for the Christian entrepreneur. That gnawing voice of self-doubt can lead to paralyzing fear, the inability to move forward, poor quality work, and worst of all, perpetually playing small in the game of life.

When the impostor taunts, “You are not enough; you don’t have enough, know enough, and can’t do enough to serve this person well,” we hold back, withdraw, and hide.

I can do all things through Him who strengthens me.
Philippians 4:13

It’s about God’s abilities, not yours or mine.

For we are His workmanship, created in Christ Jesus for good works,
which God prepared beforehand so that we would walk in them.
Ephesians 2:10

God’s various expressions of power are in action everywhere;
but God himself is behind it all. Each person is given something to do that shows who God is.
I Corinthians 12:6-7

God has already uniquely created, called, and equipped you and me. He has prepared good works (for example, a particular coaching relationship) for us to walk in.

Make a careful exploration of who you are and the work you have been given, and then sink yourself into that.
Don’t be impressed with yourself. Don’t compare yourself with others.
Each of you must take responsibility for doing the creative best you can with your own life.
Galatians 6:4-5, MSG

God had put this person in my path, so He wanted to use me. Not someone else. I was not to compare but obey.

Each of you should use whatever gift you have received to serve others,
as faithful stewards of God’s grace in its various forms.
I Peter 4: 10 NIV

It’s not about me. I exist to serve.

Which brings me back to Michelle. As her words slowly began to seep through the cacophony of self-accusation in my head, I began to hear a person. A real person who, along with her amazing accomplishments, had real needs. Her own insecurities. Challenges that were holding her back.

In that moment, I clearly saw my choice. I could continue to make that inquiry call all about me. My insecurities. My lack. My anxiety about not measuring-up. Or I could believe God’s truth. It didn’t matter whether I “felt” it to be true or not. It was true. I could lean into it, trust it, and act on it. I could listen, coach, and serve.

With God’s help, that what I decided to do.

I got a new client that day. And Lord willing, Michelle, got what she needed as well.

How about you? In what ways is the impostor syndrome holding you back?

Will you join me today in believing and acting on God’s truth, not the impostor syndrome’s lies?

It’s about God abilities, not mine.

*For confidentiality reasons, Michelle’s name has been changed.