Pink Vans are Not for Driving 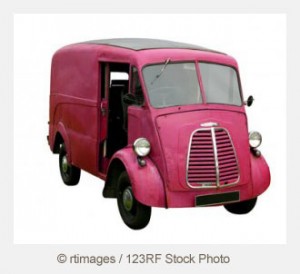 The old van had sat in the garage for months – Dad said the engine was seized and it wasn’t worth the expense of rebuilding it.  Bought at auction at the end of its working life as a Post Office delivery van, we had overhauled it and re sprayed it deep pink – well, the paint was really cheap.

Years of service in the family business delivering plants, flowers and vegetables to our customers, and taking me to school when the weather was bad were over.  Now it provided hours of practice for an eight year old boy with a rich imagination and important skills to learn.

The flat battery couldn’t start the dead engine, but the key turned, the clutch worked and the gear stick selected the right ratios as we picked up speed.  Reversing is more difficult in a van, but careful use of the mirrors helped me get into the tightest spots.

One day I came home from school to find the van had been towed away, and I don’t think it was to someone who wanted to rebuild her.  Sorry, rebuild it.  My dreams of stripping down the engine and getting the pink van back on the road when I was old enough to drive were never going to happen.  Many years later I realised that it didn’t matter.  The old pink van was for practice, not for driving.

David could deal with lions with his bare hands and was a great shot with a sling.  He had to be, to protect the family sheep from being attacked by the wild animals that would otherwise tear them to pieces.  He had honed the skill over years of shepherding, but although the sheep were probably quite grateful (how do sheep express their gratitude?) this wasn’t the main act.  The wild animals were practice for what was to come.

Facing wild Goliath, David used the skills and trust in God that he had developed to protect a different flock from attack:

But David said to Saul, “Your servant has been keeping his father’s sheep. When a lion or a bear came and carried off a sheep from the flock, I went after it, struck it and rescued the sheep from its mouth. When it turned on me, I seized it by its hair, struck it and killed it.  Your servant has killed both the lion and the bear; this uncircumcised Philistine will be like one of them, because he has defied the armies of the living God.  The Lord who delivered me from the paw of the lion and the paw of the bear will deliver me from the hand of this Philistine.” Saul said to David, “Go, and the Lord be with you.” (1Samuel 17:34-37)

Turns out the bears and lions were just playing; practice for the real thing.

Isn’t much of life a preparation for the real thing?  What if the challenges and difficulties you or your clients are dealing with right now are building something of immense value?

Praise be to the God and Father of our Lord Jesus Christ! In his great mercy he has given us new birth into a living hope through the resurrection of Jesus Christ from the dead, and into an inheritance that can never perish, spoil or fade —kept in heaven for you, who through faith are shielded by God’s power until the coming of the salvation that is ready to be revealed in the last time.  In this you greatly rejoice, though now for a little while you may have had to suffer grief in all kinds of trials.  These have come so that your faith—of greater worth than gold, which perishes even though refined by fire —may be proved genuine and may result in praise, glory and honour when Jesus Christ is revealed.  (1 Peter 1:3-7)

When dreams are shattered and hopes turn sour, God is doing a deeper work.

Did you ever have a Pink Van?

I am sure you had a Pink Van that was towed away because it was not for driving. Where did it take you?