Stuck in the Starting Blocks of Life? 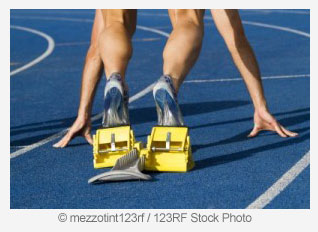 It was a sight he would never forget.  Seeing one of the greatest athletes of all time break a running record no-one thought possible transformed what he believed about himself.  As he walked from the cinema he broke into a run and sprinted down the high street, feeling like he could run forever, hearing the sound track of “Chariots of Fire” echo around his imagination.  Shame he had school the next day.

But that day many years ago changed everything, and now he believed.  Believed that a different future was possible, that he could achieve the dream inside that he didn’t know existed.  Even now he wasn’t clear on what it was, but he could feel it welling up to possibility.  Years of training, exercise, practice and lost races marked the path, but belief kept him pressing on through the doubts.

All that was past had brought him to Today.  To the starting line of the ultimate race, the pinnacle of his career with everything to win, everything to lose.  His feet were secure, firm against the starting blocks in readiness for the explosion of power which would propel him down the track.  So why, when the race started, did he get stuck in the blocks?  His slow start left him behind the other competitors, all streaking towards the finish line.  Everyone knew he was a great athlete, but his actions that day didn’t line up with the truth.

Where do we get stuck?

Coaches help clients get unstuck and begin making the progress they deserve, fulfilling the purpose they were designed for.  Our clients have huge potential, phenomenal skills, a unique contribution to enrich others and vast opportunities to make a difference in the world.  Yet it doesn’t seem to be happening.  Just occasionally, even coaches suffer from homeostasis.  These are just a few of the symptoms:

The analogy of the athlete stuck in the blocks suggests that our identity is often not the problem, it is what we believe about who we are that counts and results in actions rooted in that belief:

Here are some approaches to three of these common issues:

Jesus promised that those who come to Him, hear his words, and put them into practice will be set on a firm foundation.  He is the rock, the secure base on which everything stands.  Starting from a secure base of truth and security we can move forward in confidence and trust.

He will be the sure foundation for your times, a rich store of salvation and wisdom and knowledge; the fear of the LORD is the key to this treasure.  (Isaiah 33:6)
Trust in the Lord forever, for the Lord, the Lord, is the Rock eternal.  (Isaiah 26:4)

We don’t hear the starting gun

Knowing the right time to go is sometimes difficult, but it seems to me that most of the time God says “Today” and we say “not yet.”  Since it is impossible to please God without exercising faith, the right time must always precede the evidence of our senses.  We think we aren’t ready when God says he has qualified us.

As has just been said: “Today, if you hear his voice, do not harden your hearts as you did in the rebellion.” Who were they who heard and rebelled? Were they not all those Moses led out of Egypt?  And with whom was he angry for forty years? Was it not with those who sinned, whose bodies perished in the wilderness?  And to whom did God swear that they would never enter his rest if not to those who disobeyed?  So we see that they were not able to enter, because of their unbelief.  (Hebrews 3:15-19)
…and immediately they left the boat and their father and followed him.  (Matthew 4:22)

We can’t see the track

This might sound odd.  How could the athlete not see the track right in front of him?  Watching the 100m sprint in the Olympic stadium, you can see other events going on in the background.  The javelin, the high jump, pole vaulting and discus throwing.  As we look around us, waiting to start, we can see events that others have entered.  But when a sprinter begins to run there is only one place to look – straight ahead.

Instead of copying others, we are to run our race, the one set before us.  In Isaiah 58 God promises a light to our path, and constant guidance as we live his way (Isaiah 58:6-12).  Jesus said that we won’t need to worry about what happens next as we seek his kingdom and righteousness.

God’s specific will becomes clear as we follow his ways.

How do you help your clients who are stuck in the starting blocks when: